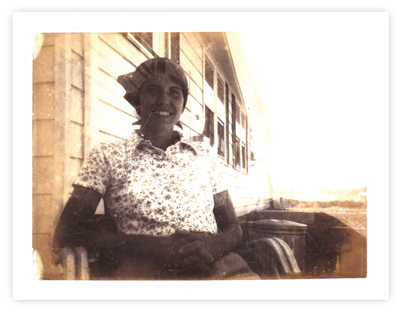 When I was about eight, my grandfather gave me one of his cameras – a Polaroid Color Pack Land Camera. My grandfather was a camera buff – always at the ready at family gatherings.  He had recorded his intrepid life as an agronomist for the Foreign Service, taking his wife and three daughters though sojourns in Panama and Africa.

This specific photo of my Aunt Polly was taken by my young self in the back of my grandparent’s house on the eastern shore of Maryland. Polly was my favorite aunt – calm, gracious, loving, beautiful. She had four children but always had time to spend with me as well, patiently teaching me how to sew. When I took this photo, I remember a hot day, and the sound of the camera clicking through its motions. I remember the smell of the developing gel, pink and toxic, and being careful not to get it on my fingertips. Pulling back the sheet after waiting 60 seconds was like witnessing a magic trick – how could something so neat even be possible?

My Aunt Polly died this year at 59 of pancreatic cancer. She never drank nor smoked, or even wore makeup. She grew her own food, tended a flock of 50 Heritage chickens, and had a life-long faith in the Lord. This photo of her is how I will remember her, that specific moment in time my own magic proof of her true self.

This is an image I took on my 5th birthday, in July of 1982. We were living in Seoul, Korea at the time. I love how the kids all look terribly bored. I suppose that even at a young age, I was boring my photographic subjects. Everyone probably wanted to get back to pin-the-tail-on-the-donkey, or pass-the-parcel – and I just wanted them to pose for one more shot.

The political situation in Korea was very much in flux in the early eighties. I remember balloons from North Korea flying over that backyard, dropping hundreds of propaganda fliers about how fantastic life was in the North. I’d run around the yard catching them as they fluttered down.

This image is particularly poignant for me, because my friend Noelle, on the left of the picture, her sister, and their parents were killed a year later when the Russian military shot down Korean Airlines flight 007 for mistakenly crossing into Russian airspace just north of Japan. It was one of the most horrific events in the Cold War, and it’s haunted me since. At the time of this picture, we were innocent little kids at a (boring) birthday party, completely unaware of the political drama playing out on the international stage. When I look at it now, I see it as a picture about the last days of innocence.